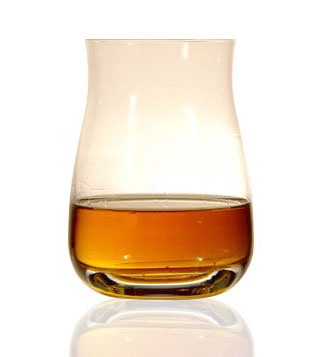 If you bought a bottle of Twelve Year Old Scotch, and you hang on to if for nine years, guess what you have? A bottle of 12 year old Scotch. Scotch Whiskey is different from wine in the aging process. Only bad things can happen after its bottled. Keep it in a dark, cool place.

Aging of Scotch takes place in an oak cask, which is charred inside before being filled. Over the years, the whisky seeps in and out of the charcoal. This filters it, mellowing it, and gives it the caramel color (charred wood, like charred sugar, produces caramel, both being of similar chemical composition.)

Some would try to speed the process. They add caramel coloring to the blend, to make it look like it has spent the time aging.

Some distilleries, like The Macallan, make a big deal of using oak casks from Jirez, Spain that were used to hold Sherry wine. They char them and use them as normal. It adds a bit of Sherry wine taste to the Scotch. Whether or not this is superior, I leave to your discretion. I can take it or leave it. Others use barrels formerly used for aging American Bourbon Whiskey (Laphroaig), others insist on new oak barrels (Glenmorangie). Many use some of each kind of barrel and marry them before bottling (Glenfiddich).

Finally, most Single Malts are dilluted to bottling strength (usually 86 US proof/43% alcohol) with spring water. Cadenhead and a few others bottles "cask strength" single malts, at the proof level of the barrel, often around 105 proof (52.5% alcohol). Also, so-called "Single single Malts" are bottled directly from a selected cask, instead of from the combination of all the casks from that distillery for that year.

Made in the high country, of course, which is also where the river Spey is.

The lowest altitude of the Malts, Islay Malts have the smoky, peaty flavour of in spades, plus a hint of saltiness, due to their sea-side aging storage. The peat of this region is a little different, as well. Islay, as you may have guessed, is an island off of the Coast of Scotland. An Isle of Skye Malt (there's only one, Talisker) has similar qualities, as do some coastal Highland Single Malts on the sea, like Oban.

Geographically grouped in the Highlands, Speyside Malts vary from the delicacy of higher altitude Highland Malts to some of the rich flavours of the Islay Malts. The Glenlivet is a Speyside-located Highland Malt. I always get this confused, because I think of Islay when I hear Spey. Spey is a river that runs through the Highlands, but most of the distilleries are by the last few miles of the river in a valley (the low Highlands? I don't know!)

Lowland Malts often have a different character than the Highlands. Glenkinchie is the only Lowland I'm familiar with. Since the largest majority of distilleries lie along the river Spey, Lowlands are rarer.

A kind of growth found in swampy areas. Sometimes it is found in huge deposits, sort of like geological coal in the making. Used extensively in Ireland and Scotland as fuel, it is mined right out of the hillside and used for household heating and distillation. The peat I saw in Ireland was reddish and fibrous, nicknamed turf. It is compressed, cut up into brick-sized pieces and piled up like so much sod before a landscaping job. Like coal, it comes in different varieties, and some burns cleaner then others.

Your average Scotch is a blend, like Chivas Regal. By blending different distillations, weaknesses can be hidden or compensated for, and strengths can be compounded. If the Masters are good at what they do, they can produce consistent blends year after year.

Single Malts, on the other hand, are much more of a challenge for the distiller. After a few years, the whiskey is sampled to see if it is good enough to be bottled as a Single Malt under the distillery's name. If not, it goes to a larger firm that blends it with other distillations.

A marrying of Malt whiskies from different distilleries, containing no grain alcohol.

Want to master Microsoft Excel and take your work-from-home job prospects to the next level? Jump-start your career with our Premium A-to-Z Microsoft Excel Training Bundle from the new Gadget Hacks Shop and get lifetime access to more than 40 hours of Basic to Advanced instruction on functions, formula, tools, and more.

Other worthwhile deals to check out:

Join the Next Reality AR Community

Get the latest in AR — delivered straight to your inbox.